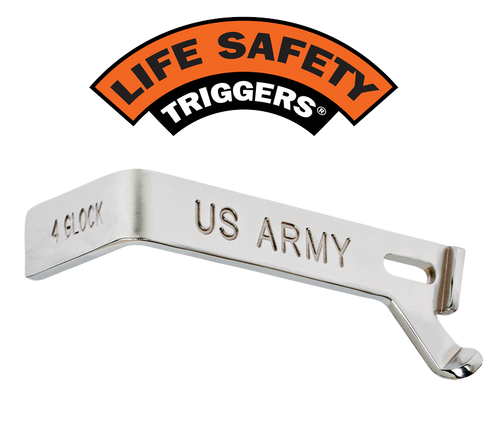 This is a 3.5 Lb. Drop-in trigger connector.

No modification needed. This is a highly Polished 3.5 angled connector that will feel smoother and lighter then your stock trigger feel. Cleaner break with nicer reset. Self-cleaning channel.

This connector would compare to an Ultimate 3.5 with a slightly higher polish.

The 3.5 LB. Tigger Connector pays humble homage to the US ARMY soldiers past and present, to my friends and family, and to those with whom I served along with. It is a piece of American Cold Steel that will transform your Austrian pistol into a loyal straight shooting American Soldier. "This we'll Defend" distinguishes the US Soldier from all others. The United States Amy (USA) is the largest and first branch of the Armed Forces of the United States which performs land- based military operations. The ARMY performs land-based military operations. The modern U.S. Army has its roots in the Continental Army, which was formed to fight the American Revolutionary War (1775-83) before the U.S. was established as a country. Every Soldier is a rifleman, trained first as a disciplined warrior regardless of military occupational specialty. Know your pistol as your rifle, make it your own and defend what's yours and ours! Ghost Life from the home front to the battle front! 1775After the Revolutionary War, the Congress of the Confederation created the United States Army on 3 June 1784, to replace the disbanded Continental Army. The United States Army considers itself descended from the Continental Army, and dates its institutional inception from the origin of that armed force in 1775. DUTY, HONOR, COUNTRY!