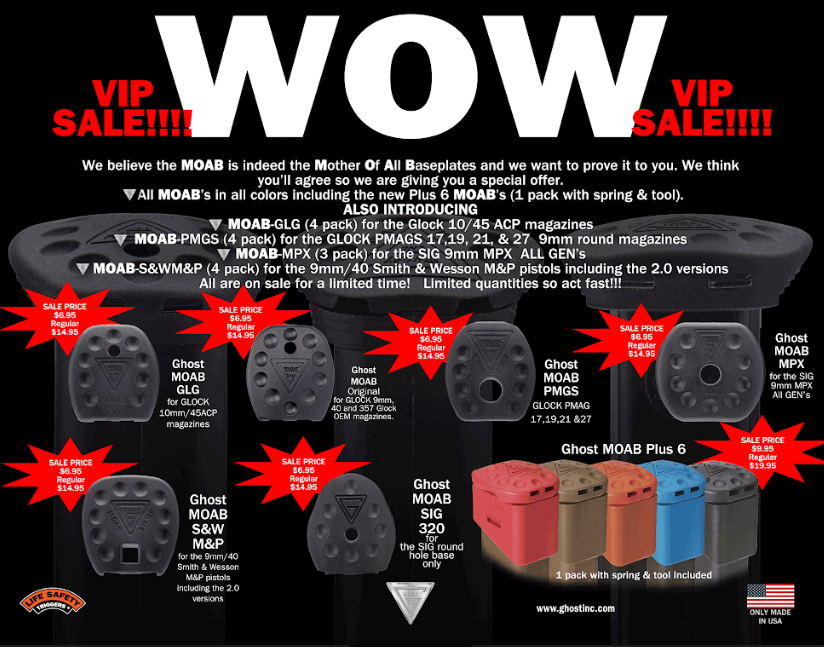 I want to share a story with you about our MOAB Baseplates.

Why the MOAB, and my quest for a better baseplate.

A few years ago, a group of us we were shooting, we were doing drills with reloads thrown in. After a few reloads I said can’t anyone make a baseplate that doesn’t hurt during a reload. Everyone looked at me with the look, you’re the inventor guy!!

For pistols I had been using the Larry Vickers baseplates and some of the design that Dave Spaulding had shown me, yes both were head and shoulders better than the original Glock baseplates. But they are all flat, and they still gave me a spike in my palm when I seated the magazine and sometimes the flatness didn’t provide enough material between the base and pistol to effectively seat the magazines, resulting in an embarrassing and potentially fatal failure to put it in!

So, I took the best of both concepts and added a curved base with debris channels. So simple it was one of those DUH moments, soo much more effective and no more palm strikes. Additionally, the curved base gives just that little extra that guarantees you will seat the magazine especially under speed/stressful reloads.

After exhaustive testing of various 3-d printed prototype baseplates we settled on our current design. The MOAB, the Mother Of All Baseplates, was born. We decided to name it MOAB based on the responses we got from everyone that tried it. They unanimously stated it was “the best baseplate that had ever tried!!” So, Boom MOAB!!

Why I am telling you this? Because we believe the MOAB is indeed the Mother Of All Baseplates and we want to prove it to you. We think you’ll agree so we are giving you a special offer. Now we have sold thousands of MOAB’s, we have sold the MOAB’s to specialized units in the US Military and as I go through my day I see our MOAB’s and Plus 6 MOAB’s on the duty belts of police officers here in Miami-Dade County and several other municipalities. So, there is no doubt that they are the best baseplates out there, hence MOAB!!

We are also introducing and including in the special offer our newest MOAB’s for PMAG’s (3 pack) AR Rifle 5.56 magazines both the M2 & M3!! These are the only MOAB baseplates in the world for PMAG’s!! PMAG Rifle M2 & M3 MOAB’s are now $6.95 Regular price $14.95. These were developed with help from Bob Keller of Gamut Resolutions; https://gamutresolutions.com/ . We let Bob try the various versions of prototypes and we settled on the current variant. One of the most important take a way was the fact that when wearing a chess rig and gloves it was difficult to extract the magazines for reloads. This difficulty to extract is part of the retention features of most chest rigs. With the MOABs installed you have a large gripping surface especially while wearing gloves!!

“These are Badass you get total control of your mag!!” Bob Keller. Bob was kind enough to share his years of experience running a carbine and reloading on the two-way range. So, avoidE.D.&P.E. magazine Extraction Disasters and Professional Embarrassment, control your mags and reloads go MOAB!