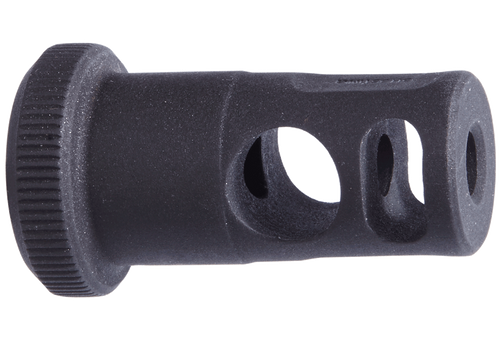 I really like AR’s, M-16’s and M-4’s, carried one for years. I like all the cool stuff you can buy for them-great gear is good. It always bothered me how much I had to pay for stuff and sometimes find out that it wasn’t what it was cracked up to be.

So, I decided to start making some of things I use the most of. First I did a lot research bought just about every muzzle device on the market. We took what worked the best and what I liked and combined these features into a new muzzle brake everyone can afford. Second we shot the heck of the prototypes and settled on the one that worked the best. Our new brakes are just like all the other parts we manufacture they come with unconditional lifetime guarantee, so shoot the stuff out of it.

The design of the ports are made for effective compensation and recoil reduction.

Newton's third law of motion explains the theory behind recoil reducing devices. For every action there is an equal and opposite reaction. Simply stated, recoil-reducing devices reduce perceived or felt recoil by diverting a portion of the burning gases behind the projectile to the side rather than adding additional rearward recoil, therefore reducing the rearward impulse or kick.

By reducing recoil and changing gas direction, they also help to reduce muzzle lift, all rifles and shooters can benefit from recoil reduction since they help eliminate muzzle rise – which is noticeable when shooting in rapid succession whether standing, sitting, or prone.

Are slots milled in the recoil reducer more effective than drilled holes? There is little proof that one design is better at reducing recoil better than others. The ones deemed the most effective all have similar qualities designed in them: An expansion chamber, holes milled or drilled perpendicular to the bore, and made of high-quality material.

This subject has always interested me. Both as a soldier and as an AR shooter. Let’s think about this. The common consensus is if you’re a soldier you need a Flash Suppressor/Hider to conceal your location from the foe you are engaging at night.

Individuals interested in Self Defense, Sport Shooters and Hunters on the other hand want muzzle brakes to reduce recoil to decrease shot to shot times and to prolong a shooting session.

The goal should be in all applications is to stabilize the muzzle for target assessment/acquisition and or re-engagement.

Why do most threat assault rifles (AK-74) use muzzle brakes while M-4’s use flash suppressors?

One has a doctrine and training stresses that to use an assault rifle effectively it should be fired rapidly or in full auto to dominate the battle space and because that fire has to be accurate to be effective you need a muzzle brake to control and stabilize the muzzle. The other doctrine emphasizes aimed semi-auto fire where concealment/cover of the soldier is important. Watch some YouTube videos of our soldiers in Afghanistan (AFG) and see how many are firing semi-auto. Semi-auto fire is counterproductive to owning the battle space. We all know or will be educated to the fact after firing a rifle equipped with a muzzle brake that for the fastest re-engagement or targets requiring multiple hits a muzzle brake gives the operator a distinct advantage. Muzzle rise or recoil takes the rifle and operator off the target-more on this later.

I think the Flash Suppressor/Hider for the soldier makes sense if the soldier is acting as an individual or part of a sniper team and is going to fire one round at a time from a concealed position, but let’s face the facts we know that soldiers are most effective as a member team commonly supported by a SAW and or GPMG firing tracers. Once lead starts flying most soldiers will shoot full auto to gain firepower superiority and will be firing and moving to create violence of action. Most Flash Suppressors/Hiders are of little to no effect under these circumstances. Add the tracing/tracer effect and that makes Flash Suppressor/Hider muzzle devices next to worthless. In our current operations (War in AFG) even using the A-2 style flash hider you will see a considerable amount of dust kick up when our troops fire their weapons.

As soldiers are firing and maneuvering what do think you would see? The attendant dust cloud rising? The soldier and his 3-5 team members maneuvering with the related noise of their equipment and the Como/yelling of commands and/or contact information? Or a muzzle flash?

Common consensus is that Muzzle Brakes are too loud (yes), produce a bright flash (some) and create a concussive effect for those around you (hopefully). Never mind if you fire them in a closed structure, confined space or a conveyance.

I think these attributes are an asset for the thinking individual who has to use their rifle for self-defense.

Loud heck yes you may have to fire only a few rounds (I have hearing protection hanging on my rifle) I want to be heard by neighbors etc. they will summon the police when they hear gunfire, I may be fighting for my life, a little preoccupied to dial 911 and I want the sound to disorient the threat in front of the muzzle (also remember Auditory Exclusion). Remember the imperative in order of importance: Shoot, Move and lastly Communicate!

Bright flash I hope so! I learned as a firefighter no one wants to get burned and humans will reflexively avoid large balls of flame that they perceive are aimed at them. They will reflexively avert from you by jumping/diving out of the way! Think about that! Therefore they will lose precious time and will not be capable of fighting until they can reorient (think OODA Loop)! Again think about that, not capable of fighting until they can reorient that would be 1.5 seconds for the average person. How many times could you engage someone in 1.5 seconds? For the rest of their lives! This brings up an important point, shoot your rifle in an environment that will as closely as possible replicate the intended work space. This will insure that you are familiarized with the flash and the other aspects your muzzle brake.

The concussive effect is good too and will be in front of the muzzle unless you are in a confined space. Think how you avert, flinch or startle when you hear a loud noise or noise that is louder than you anticipated what will the person in front of the muzzle do? Again think OODA Loop! So shoot your rifle in an environment that will as closely as possible replicate the intended work space.

Most importantly muzzle brakes reduce recoil to decrease shot to shot times. Most shooters can shoot a rifle with a brake twice as fast as rifle without one. I will take the light and noise to get muzzle stabilization to facilitate a faster follow up shot.

Muzzle stabilization? Yes the muzzle stays on the plane you placed it during the firing, cycling and recoiling of the rifle. That means the target stays in your optic/sights for instant re-engagement your engagement speed is only limited by your ability to press the trigger rapidly. Only Hits Count!